"The FDA is helping to speed up the process of researching and approving psilocybin, a hallucinogenic substance in magic mushrooms, to treat major depressive disorder (MDD).

For the second time in a year, the U.S. Food and Drug Administration (FDA) has designated psilocybin therapy — currently being tested in clinical trials — as "breakthrough therapy," an action that is meant to accelerate the typically sluggish process of drug development and review. It is typically requested by a drug company and granted only when preliminary evidence suggests the drug may be an enormous improvement over already available therapy, according to the FDA.

Last year, the FDA granted "breakthrough therapy" status to psilocybin therapy in the still-ongoing clinical trials run by the company Compass Pathways, which are looking into psilocybin's potential to treat severe treatment-resistant depression, or depression in patients who have not improved after undergoing two different antidepressant treatments, according to New Atlas.

Now, the FDA has granted another "breakthrough therapy" status to the psychedelic treatment, this time for a U.S.-based clinical trial conducted by the nonprofit Usona Institute, according to a statement from the company. This clinical trial, which includes 80 participants at seven different sites across the U.S., focuses on the efficacy of treating patients with MDD with a single dose of psilocybin.

The phase 2 trial is expected to be completed by early 2021, and with the help of this status, Usona expects it to quickly move into a larger phase 3 trial, according to New Atlas. Around one in three treatments previously given a Breakthrough Therapy status have moved on to get market approval, New Atlas wrote.

"What is truly groundbreaking is FDA's rightful acknowledgement that MDD, not just the much smaller treatment-resistant depression population, represents an unmet medical need and that the available data suggest that psilocybin may offer a substantial clinical improvement over existing therapies," Dr. Charles Raison, the director of clinical and translational research at Usona, said in the statement.

This isn't the first time that a psychedelic has been researched for its potential in treating depression. In March, the FDA approved a nasal spray depression treatment for treatment-resistant patients based on Esketamine, a substance related to ketamine — an anesthetic that's also been used as an illicit party drug. But much is still unknown even of this approved drug. Though fast-acting, it's unclear how Esketamine changes the brain and thus what its long-term effects will be, according to a previous Live Science report."

In 2013 Bill Linton and Malynn Utzinger began to discuss their shared interest in research exploring psilocybin as a potential treatment for psychological distress. The results of previous studies were inspiring, but a lot of work was still necessary to move this important research forward. In 2014, Usona Institute became a non-profit with the ultimate goal of shepherding psilocybin research through the necessary phases of clinical trials so that the FDA can thoroughly evaluate it as a possible prescribed treatment for depression.

Depression is a health crisis of epidemic proportions. According to the World Health Organization, it is the leading cause of disability in the world. There is an urgent need to identify and test novel treatments that may benefit people suffering from depression.

Usona is striving to answer that need.

As part of our mission to alleviate mental suffering, we are exploring the therapeutic potential of consciousness‑expanding medicines like psilocybin.

World‑renowned experts guide us, with internal and collaborative expertise in the fields of mental health and psilocybin research. We are currently developing research studies focusing on psilocybin as a treatment for depression. 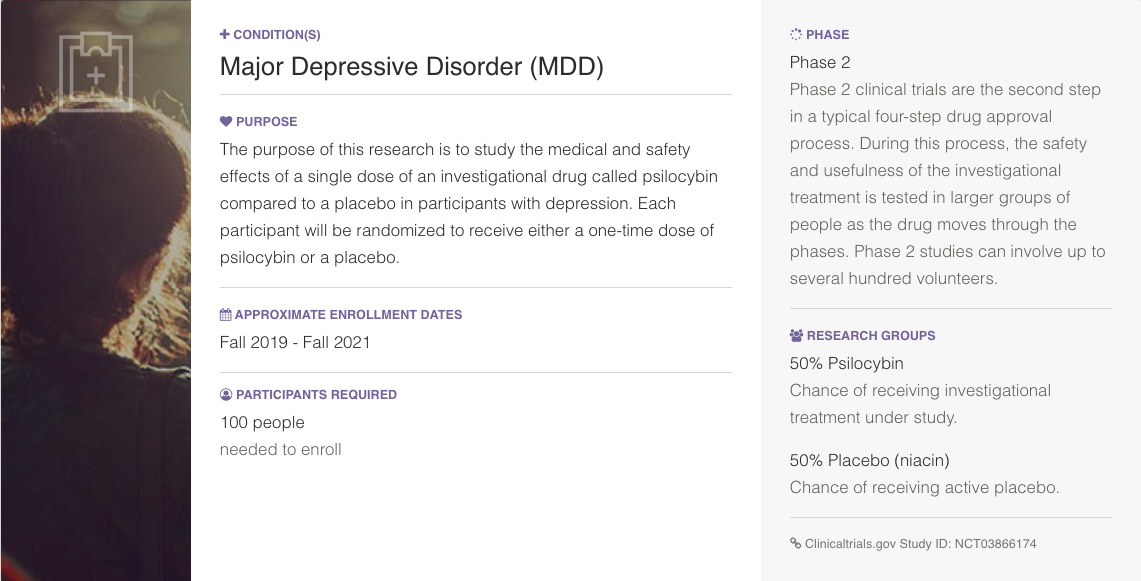