Calaveras for the Day of the Dead

Calaveras have become one of the most recognizable symbols of Dia de los Muertos. Small sugar skulls are often made as treats and decoration during celebrations. Calaveras have also found their way into many forms of popular culture, featuring in everything from clothing and tattoos to video games and movies.

Much of the justification for claiming pre-Columbian antecedents derives from such ancient Mesoamerican iconography, with its undeniable plethora of skulls and skeletons, corresponding to the equally plentiful presence of similar motifs during the Day of the Dead today. Then, too, the Mexica, like contemporary Mexicans, incorporated anthropomorphic sweets into their religious ceremonies. Periodically, throughout the ritual year, the Mexica fashioned images out of wood, which they covered with tzoalli, or amaranth seed dough, shaped in human form. The images, usually representing deities, were distributed for consumption among certain social classes. It of course has been tempting for scholars to interpret these tzoalli as ancient precursors of the special breads known as pan de muerto as well as of the skull-shaped sugar candies widely sold during late October and early November in Mexico today.

And yet, it is important to refine our comparisons and recognize critical distinctions between ancient and contemporary skulls and skeletons. For one thing, skulls today tend to be humorously decorated sugar confections that are named after and given as presents to living friends and relatives. No contemporary Mexican death ceremony utilizes a real human skull. By contrast, the Mexica used real skulls as decorative motifs. Although these might be adorned with eyes, noses, or other features made of semi-precious stone, the basis of the statuary was actual bone. Anthropomorphic candies like tzoalli, on the other hand, represented full-fleshed supernatural beings, not live humans. Moreover these figures were serious in intent and, insofar as we know, completely devoid of the playfulness that characterizes contemporary Day of the Dead sweets. In fact, there is no evidence that the Mexica cult of death even remotely approximated the humorous tone that characterizes the Day of the Dead as we know it. 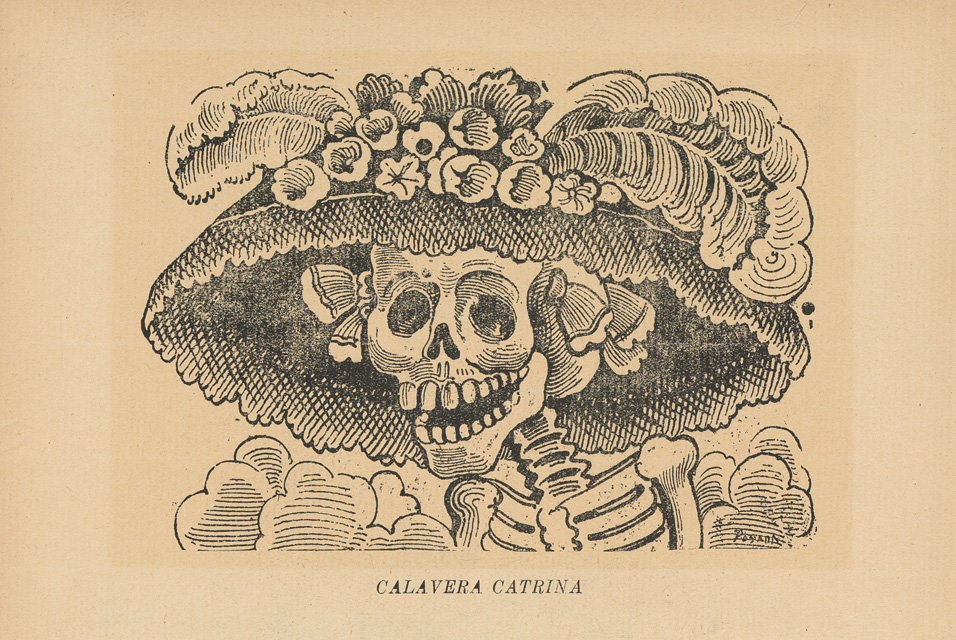 Mexican illustrator Jose Guadalupe Posada "is perhaps best known for his costumed skeleton characters or calaveras. He used these as a vehicle for political and social satire, as in Calavera of the Cyclists (1889–95), in which he criticized what he saw as an obsession with progress. The clergy, revolutionaries, and Mexican pastimes also came under attack (see fig.). These calavera engravings epitomize Posada’s originality and characterization, and they anticipate Mexican mural painting of the 1920s and 1930s." --Grove Art Online

"Part of Posada's criticism of the Mexican society of the time can be seen in the figure of La Catrina (the Dapper Skeleton), created in 1913 and originally named "La Calavera Garbancera". Garbanceros was the name given to those of indigenous origin who claimed to be European; in other words those who disowned their culture." --Google Arts & Culture