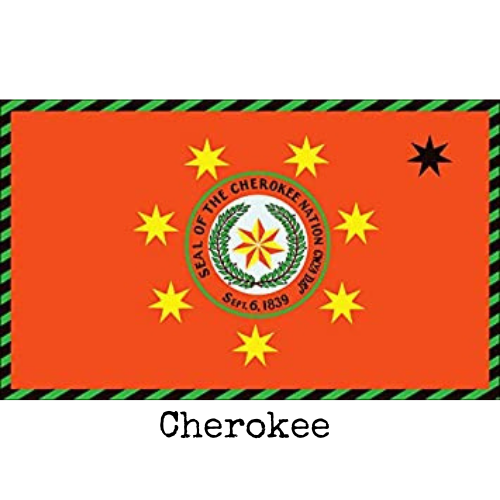 Cherokee (pronounced CHAIR-uh-key). The name comes from the Creek word chelokee, which means “people of a different speech.” The Cherokee refer to themselves as Ani'-Yun'wiya', meaning “the real people” or “the principal people,” or Tsalagi, which comes from a Choctaw (see entry) word for “people living in a land of many caves.” The tribe's original name was Kituwah, which is why the traditional group calls itself the United Keetoowah Band.

Location. The Cherokee originally lived in parts of eight present-day southeastern states: North Carolina, South Carolina, Virginia, West Virginia, Kentucky, Tennessee, Georgia, and Alabama. In the early twenty-first century, the tribal lands of the Cherokee Nation spanned 124,000 acres throughout fourteen counties in northeastern Oklahoma. Although the territory is not a reservation, the U.S. government holds it in trust and considers it a Jurisdictional Service Area. By the 2000s, most Cherokee lived in northeastern Oklahoma, North Carolina, and Tennessee.

Origins and Group Affiliations. Many historians believe that the very early ancestors of the Cherokee moved from territory that is now Mexico and Texas to the Great Lakes region. Between three thousand to four thousand years ago, after enduring conflicts with the Iroquois and the Delaware (see entries) tribes, the Cherokee moved again—this time to the southeastern part of the present-day United States. Their traditional enemy was the Chickasaw (see entry) tribe. By the early 2000s, three major tribal groups and more than fifty other organizations in at least twelve states claimed to have Cherokee origins.

Before the arrival of Europeans in their territory in 1540, the Cherokee were an agricultural people numbering about 50,000 who controlled 40,000 square miles (103,600 square kilometers) of land. Over the years, the tribe lost many of its people to wars and to diseases brought by the settlers. The Cherokee became known as one of the “Five Civilized Tribes” along with the Chickasaw, Creek, Choctaw, and Seminole nations (see entries). Settlers coined this term because these groups had formed institutions that American culture valued, such as constitutional governments and school systems. This, however, did not help the Cherokee and their allies when settlers wanted their land.

During the nineteenth century, the U.S. government forced many Cherokee to move westward, away from their homeland on the sad journey known as the Trail of Tears. The Cherokee formed a new government and school systems in Indian Territory, but the U.S. government abolished those when the state of Oklahoma was created in 1907. In spite of these tragedies, the Cherokee went on to become the largest Native American group in the United States and to enjoy a high standard of living.