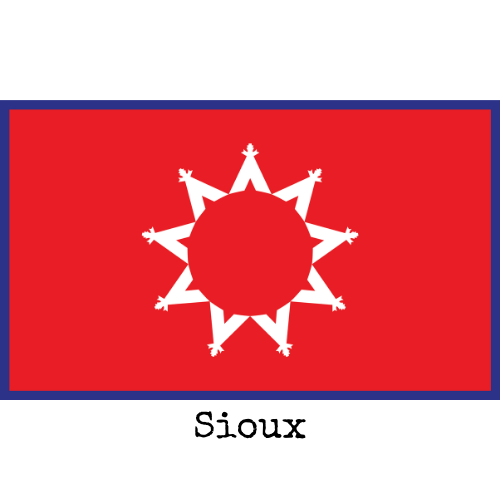 The Sioux are a cluster of Native American tribes who originated in the areas of present-day Wisconsin, Minnesota, Illinois, and Iowa. Since the early nineteenth century, the Great Sioux Nation has consisted of three subgroups: the Eastern Dakota (made up of the Santee and Sisseton), the Western Dakota (the Yankton and Yanktonai), and the Lakota (the Teton or Teton Sioux). These Sioux tribes of today were once part of one of the largest American indigenous groups north of Mexico, second in numbers only to the Algonquian people. In the pre-Columbian era (the time in the Americas from prehistory until significant European influence occurred), the Siouan peoples occupied an immense geographical area of the North American continent, from the Rocky Mountains to the Mississippi River and from the Great Lakes to the Gulf of Mexico. Scholars have been able to connect this disparate and widespread grouping of peoples through language. Long before contact with non-Indians, those who spoke the original Siouan language separated into numerous distinct tribes. Some of these many tribes include the Osage and Crow of the Great Plains, the Winnebago in Wisconsin, the Biloxi on the Gulf Coast, and the Catawba in the Southeast. The name Sioux originates from the Ottawa word na-towe-ssi (which in term was derived from a word from an earlier language meaning “foreigner”); the French wrote it as Nadouessioux. The Sioux subgroup names Lakota and Dakota are Siouan words meaning “friend” or “ally.”

The earliest records—those of French trappers in present-day Wisconsin and Minnesota in around 1660—logged approximately 28,000 Sioux in the years just prior to the European exploration and settlement of the later seventeenth century. By the early eighteenth century, the Sioux had moved west, following buffalo herds and trading opportunities and also fleeing conflict with other tribes, particularly the Cree, Ottawa, and Chippewa. Historical and anthropological research asserts that in their original location, the Sioux were semisedentary woodland people with an economy based on fishing, hunting, gathering, and some corn cultivation. They manufactured items for trade, such as beaded garments, and groups sometimes held trading fairs, partly as a means of staying in contact with their neighbors. Several Siouan groups endured years of conflict with neighboring tribes, however.

Tribal groups belonging to today's Great Sioux Nation have sixteen reservations and communities across five western U.S. states—Minnesota, Nebraska, South Dakota, North Dakota, and Montana—as well as several Canadian reserves. Numerous treaties between Sioux groups and the U.S. government over the course of two centuries gradually restricted Sioux territory. By the late nineteenth century, the tribes had been pushed westward and northward so that they chiefly resided in the northern Great Plains and Canada. The lands of the Sioux have been a focal point for some of the most dramatic events of Native American activism in modern times, including the 1973 siege of Wounded Knee. Alongside political action, the Sioux have experienced great interest in and revitalization of their traditional practices; Sioux writers, poets, and political leaders are among the most influential leaders in the North American Native American community today, and the traditions of the Sioux religion have had an influence far beyond the Sioux people.

The 2010 U.S. Census stated that 170,110 individuals identified as Sioux at that time, either solely or in combination with another race. Roughly half of these people live on reservations. The most populous Sioux reservation is the Oglala Lakota reservation of Pine Ridge in the southwest corner of South Dakota, which in 2010 was home to 18,824 people (16,906 of whom identified as Native American). Many Sioux have migrated to metropolitan areas, and some have found flourishing urban Native American communities, particularly in Chicago and Minneapolis. Family ties remain strong, however, and many urban Sioux travel frequently to their home reservation. According to the 2010 U.S. Census American Community Survey estimates for 2006 to 2010, states with large populations of Sioux tribes include California, Colorado, Montana, and South Dakota. Smaller but still significant numbers reside in Minnesota, Nebraska, North Dakota, Oklahoma, Texas, and Washington.