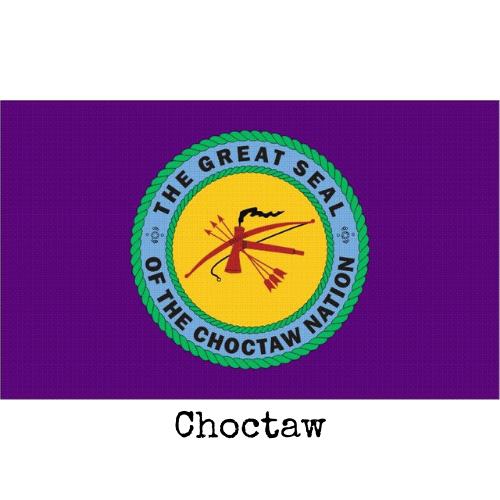 Choctaws are Native Americans who traditionally lived in what today is part of the southeastern United States. Before 1820 Choctaw territory encompassed more than 23 million acres, primarily in present-day Mississippi, and extended into sections of present-day Alabama and Louisiana. A Choctaw legend traces the origin of the Choctaw to Nanih Waiya, an ancient earthwork mound located in east-central Mississippi near the town of Noxapter. (The name Nanih Waiya can be translated as “productive mound.”) The etymology of the name Choctaw is uncertain. One theory is that it derives from the word chahta, meaning “flat head,” and might be related to the practice once followed by the Choctaw of flattening the forehead of boy infants by means of a strapped board.

In the mid-eighteenth century the Choctaw population was estimated to be about 20,000. The Choctaw had come together as a people from three or more major independent groups sometime between the mid-sixteenth to the late seventeenth centuries. Although the Choctaw were an agricultural people, their economy also relied on trade.

Today Choctaws live primarily in the states of Oklahoma and Mississippi. In Oklahoma the Choctaw Nation encompasses ten and one-half counties in the southeastern part of the state, and in Mississippi the Choctaw live on several noncontiguous blocks—together larger than the state of Massachussetts—that are located primarily in east-central Mississippi. The Choctaw people ended up in Oklahoma because of a series of forced removals by the United States government from 1831 to 1834. About 11,500 Choctaw were removed to present-day Oklahoma, but an estimated 6,000 individuals remained in Mississippi. The primary populations of Choctaw today are descendants of these two groups.

According to the American Community Survey administered by the U.S. Census Bureau, 195,764 Choctaw citizens resided in the United States in 2010, a number comparable to the population of Little Rock, Arkansas. Of this number, about 127,000 have membership in the Choctaw Nation of Oklahoma, which has headquarters in Durant, Oklahoma. The population of the Mississippi Band of Choctaw Indians is estimated at around 10,000 people. Much of the Choctaw population maintains a distinctive identity through its affiliation with these two groups, but there are also Choctaw communities in Alabama, California, Arkansas, Louisiana, and Texas.