Native American oral literature preserves cultural legacy and traditions through storytelling, oratory, and performance. Passed on through myths, songs, legends, and tales, oral literature places great importance on language. In the retelling, information must be remembered accurately. N. Scott Momaday explains: “Words are spoken with great care, and they are heard. They matter, and they must not be taken for granted; they must be taken seriously, and they must be remembered…. At the heart of the American Indian oral tradition is a deep and unconditional belief in the efficacy of language. Words are intrinsically powerful.”

The Native American peoples of North America do not share a single, unified body of mythology or literature. The many different tribal groups each developed their own stories about the creation of the world, the appearance of the first people, the place of humans in the universe, and the lives and deeds of gods and heroes. Yet, despite the immense variety of Native American mythologies, certain mythic themes, characters, and stories can be found in many of the cultures. Underlying all the myths is the idea that spiritual forces can be sensed throughout the natural world—including clouds, wind, plants, and animals—which they shape and sustain. Many stories explain how the actions of gods, heroes, and ancestors gave the earth its present form.

According to the mythologies of most Native American cultures, people originated in the places where their ancestors traditionally lived. Some tales speak of ancient migrations. Native Americans are descended from hunting and gathering peoples of northeastern Asia who migrated across the Bering Sea into North America during the most recent Ice Age. During that Ice Age, which ended around 8000 bce, the level of the oceans was much lower, and a bridge of land linked Siberia and Alaska. Some groups may also have reached Alaska from Siberia by boat or by walking on ice. Over thousands of years, the population of North America grew and diversified into the peoples and cultures that Europeans encountered when they began to colonize the continent in the 1500s ce. 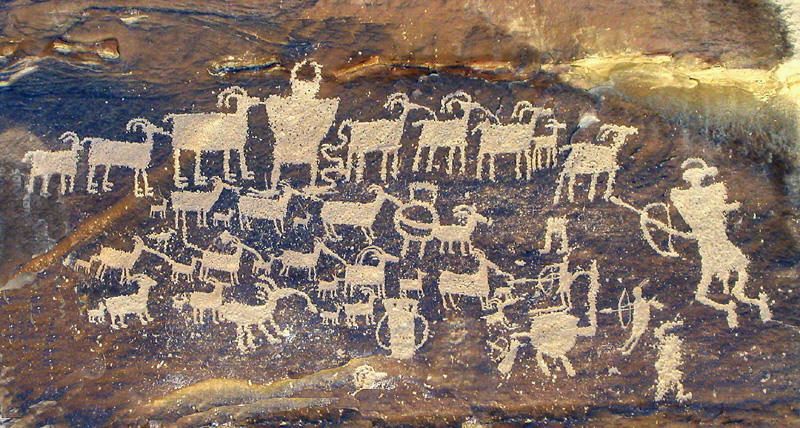 Before the arrival of Europeans and the spread of European influence, most Native Americans did not use written languages. As a result, many myths and legends were passed from generation to generation in oral form, usually by special storytellers who sometimes used objects such as stone carvings, shells, rugs, or pottery to illustrate the tales. Mythology, religion, history, and ritual were not separate things for Native American peoples. They were strands woven together in the various tales and stories that defined people's identity and gave order and meaning to their lives. The most serious of these were myths about how the gods created and ordered the universe, and about the origins of important things, such as humans, landforms, food, and death.

Certain myths could not be told lightly. They formed the basis of sacred rituals, including ceremonies in which participants acted out traditional sacred stories. Many Native Americans believed that some myths could be told only at certain times, often during winter nights. A dire fate—such as an attack by snakes—awaited those who told the stories at the wrong time. Other myths resembled folktales. They could be told for fun or to teach a lesson about proper behavior, and those who told them were free to change or add elements to the basic story. Many such tales involved tricksters.