What is Central America?

Central America is the southernmost region of North America. It lies between Mexico and South America, and it includes the countries Panama, Costa Rica, Nicaragua, Honduras, El Salvador, Guatemala, and Belize.

Geologists and physical geographers sometimes extend the northern boundary to the Isthmus of Tehuantepec in Mexico.

Is Central America a continent?

Central America is not a continent. Continents are large landmasses embedded in major tectonic plates, which are sections of Earth’s rigid outer layer that overlie a partially molten layer and move relative to one another. Central America is embedded in a tectonic plate, but both the landmass and the plate are much smaller than those of the continents it bridges, North America and South America, so it is not considered to be a continent.

What is the Central American Refugee/Migrant Crisis?

Every year, hundreds of thousands of people from El Salvador, Guatemala, and Honduras flee extreme violence and poverty and head north through Mexico to find safety.

The countries of the Northern Triangle of Central America (NTCA) have long been burdened by deep social inequality, political instability, and conflict - and in some cases have been further destabilized by US interventions in the region over the past 40 years. Now, these countries are also contending with the rapid expansion of transnational organized crime, which has exploded over the past decade. Across this region, drug and human trafficking by criminal groups known as maras, coupled with widespread corruption and weak law enforcement, have resulted in an environment where civilians face the ever-present threat of violence.

From: Doctors Without Borders

Hurricane Mitch in 1998 and two earthquakes in 2001 were among the factors further driving migration from El Salvador, Guatemala, Honduras, and Nicaragua. Similar factors have remained at work in recent years. In November 2020, Hurricanes Eta and Iota devasted the region, affecting as many as 11 million people throughout Central America. Drought also has plagued parts of El Salvador, Guatemala, and Honduras in what is known as the “Dry Corridor.” Further, government corruption, gang activity, and high homicide rates continue to affect parts of the region, driving emigration. 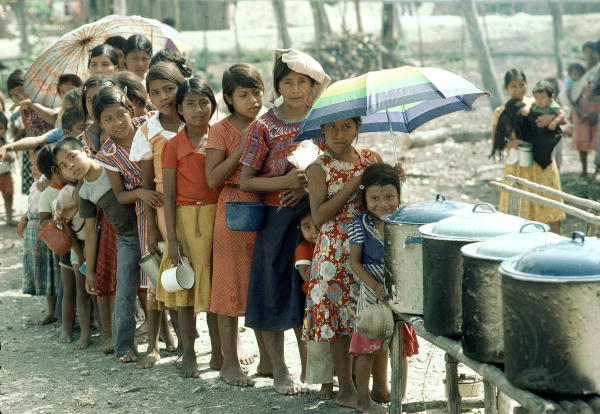 Displaced persons in Central America: Guatemalan children living in refugee camps, in the State of Campeche, wait to get their food ration.