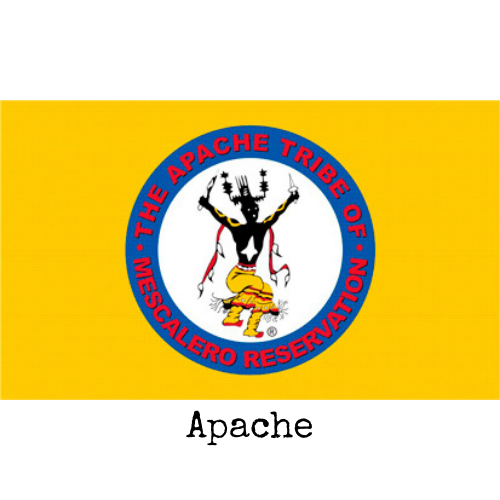 The Apache are an indigenous, or native, people whose ancestors inhabited the southwestern United States. More than a dozen separate groups once ranged over an area that included northern and eastern Arizona, New Mexico, central and western Texas, southern Colorado, and western Oklahoma and Kansas, lands notable for mountains, large mesas, and deep canyons protecting fertile valleys. The name Apache came into English through Spanish, either as the Spanish form of the Zuni word for Navajo (a closely related tribe), ?άpaču; as the Spanish version of the Yavapai word for enemy, apachu; or from mapache, the Spanish word for raccoon. The Apache call themselves Inde, meaning simply “people.”

The large number of affiliated tribes and the enormous area across which they ranged makes it difficult to estimate the pre-Columbian population of the Apache. Like the other tribes of the Great Plains, the Apache were hunters and gatherers who followed bison and other game and used small indigenous dogs to pull travois loaded with their portable possessions. Their nomadic nature and the multiple routes used by the various groups to reach the Southwest in the pre-Columbian period led to their dispersal throughout the region, from the Lipan, Jicarilla, and Mescalero Apache in western Texas and New Mexico to the Tonto and San Carlos Apache in Arizona. While nomadic, the Apache did carry on trade with the Pueblo peoples of the Four Corners region, trading bison meat and skins for maize and woven materials.

During the 2010 U.S. Census, 63,193 people (slightly more than the population of West Hartford, Connecticut) self-identified as Apache, with another 6,501 claiming membership in more than one tribe, including the Apache. This is an increase over the 2000 Census, when 56,060 claimed membership. The majority of modern Apache live either on reservations or—as in the case of the Oklahoma-based Kiowa-Apache Tribe—in Tribal Jurisdictional Areas, federally recognized areas created after the dissolution of Oklahoma's Indian Reservations in 1934. Smaller numbers live in major metropolitan centers near the reservations, such as Oklahoma City and Phoenix. An Apache community has developed in the agricultural regions of southern California, where the people moved to find work as farm laborers. The states with the highest population of Apache are Arizona, California, Texas, Colorado, New Mexico, and Oklahoma.