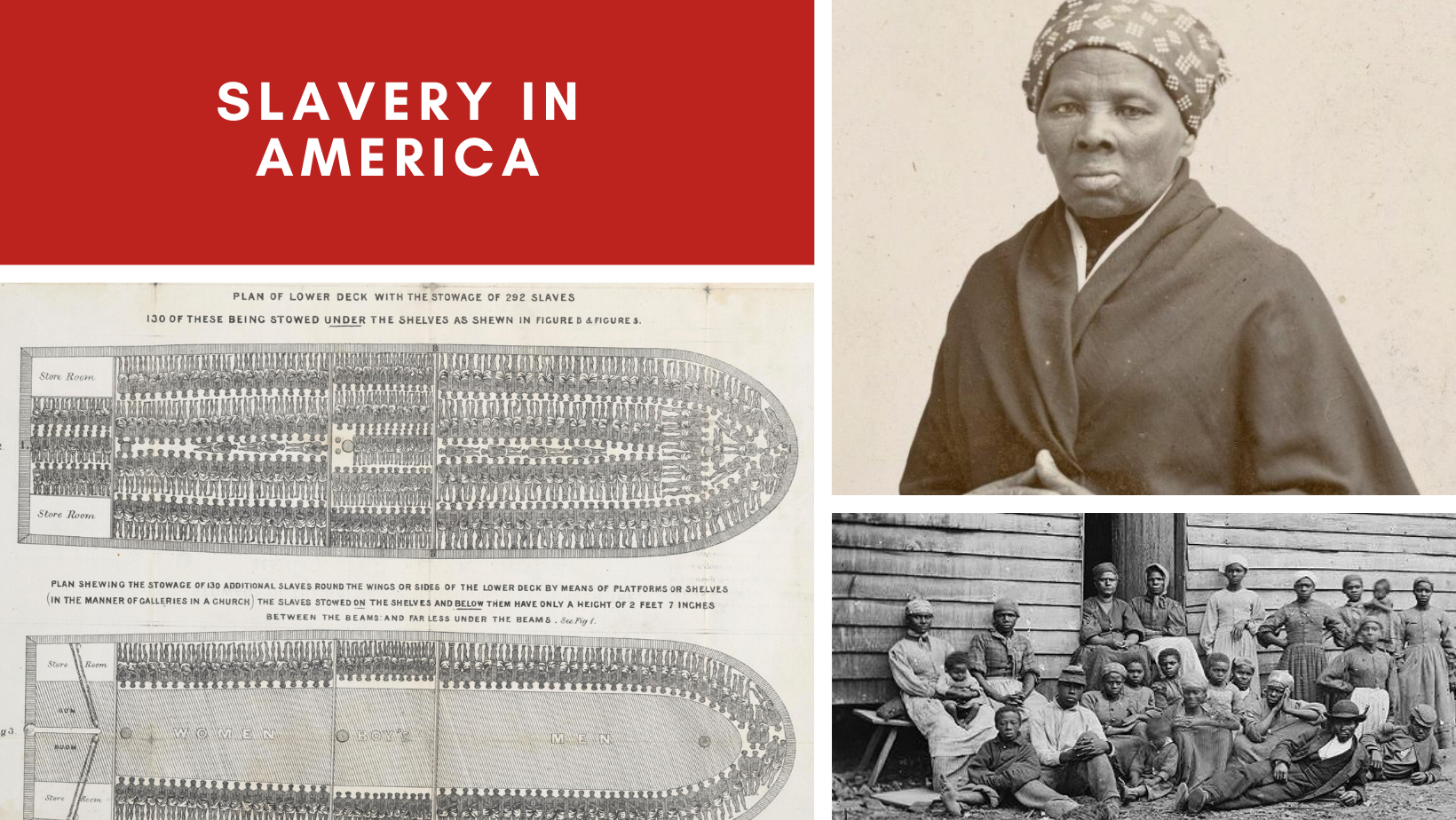 from The Hutchinson Unabridged Encyclopedia with Atlas and Weather Guide

Slavery The institution of slavery is a blot on the landscape of American history. There were about half a million African-Americans at the time of the American Revolution and about 4.5 million during the American Civil War. The life of a slave was very poor but basic needs were taken care of, because an African-American was a valuable ‘property’ whose health guaranteed the health of the plantation. Some house slaves were treated as minor members of the family, but slave owners could sell off the children or even the spouses of slaves to other plantations when they felt like it. Many female slaves bore the illegitimate children of their masters.

The cruelty was portrayed in Harriet Beecher Stowe's influential 1852 novel, Uncle Tom's Cabin, a book which helped increase the number of abolitionists in the North, who in turn helped elect Abraham Lincoln as president. Although he had been born in the southern (pro-slavery) state of Kentucky, Lincoln was determined to abolish slavery. In 1863, he issued the Emancipation Proclamation that freed slaves under Confederate control.

A documentary series on the history of American slavery from its beginnings in the British colonies through the years of post-Civil War Reconstruction. Narrated by Oscar-winner Morgan Freeman, SLAVERY AND THE MAKING OF AMERICA examines the integral role slavery played in shaping the new country and challenges the long held notion that it was exclusively a Southern enterprise. The remarkable stories of individual slaves offer fresh perspectives on the slave experience.

Defiant, brave and free, the great abolitionists Thomas Garrett, William Still and Harriet Tubman, along with hundreds of lesser known and nameless opponents of slavery, formed a Corridor of Courage stretching from Maryland's eastern shore through the length of Delaware to Philadelphia and beyond -- making the Underground Railroad a real route to freedom for enslaved Americans before the Civil War.

Long-format interviews with prominent historians blend with dramatic reenactment to create a powerful story about the fight to end slavery. Actors Edward Asner and Blair Underwood portray the two most prominent abolitionists on the eastern line of the Underground Railroad, Thomas Garrett and William Still.

Bearing a remarkable resemblance to Thomas Garrett, Asner reenacts the famous courtroom scene in 1848 in which Garrett foreshadows the Civil War and firmly declares to redouble his efforts in fighting for true freedom in America. In spite of the court's imposition of a crippling financial punishment, Garrett's ideals were not altered; his clandestine activities continued for many years even during the War.

Reading documented text in the form of letters exchanged by Thomas Garrett and William Still (a free black abolitionist in Philadelphia), Asner and Underwood bring to life the fascinating working relationship between the two men and those they helped. Underwood, as William Still, meets in secret with the frightened fugitives who pass through his Anti-Slavery Society Offices in Philadelphia on their dangerous journeys to the north.

Up From Slavery is a powerful, compelling and haunting 7-part documentary series that examines the history of slavery in America, from the arrival of the first African slaves through Nat Turner's Rebellion to the Civil War and beyond.

In 1860, as the American Experiment threatened to explode into a bloody civil war, there were as many as four hundred thousand slave-owners in the United States, and almost four million slaves. The nation was founded upon the idea that all men are created equal and endowed by their creator with the inalienable rights of life, liberty and the pursuit of happiness. The nation would pay a bloody cost for denying that right to more than twelve percent of its population.

But when slavery was first brought to America's shores, this war, and even the nation it tore apart, was centuries in the future. With incredibly detailed historical reenactments, expert commentary and the stories of slavery told through first-hand accounts, this is an epic struggle 400 years in the making. A journey into the past like none other. This is the story of these men and women who by their hands laid the foundation of what would become the most powerful nation on Earth. Join us as we rise...UP FROM SLAVERY.